Down here in Australia, December is summer and sunshine, with many of Aussies spending their time by the beach, the pool or the air conditioning!

However all of my teenage and university Christmas holidays were spent working on our farm in the north west of NSW.
Sometimes it was a family affair, sometimes it was just my dad and me.

When it was just the two us, dad created a little rule that of we had to 'live off the land’...no shop bought meat or poultry allowed.  I only agreed if I was allowed whatever vegetables, spices, herbs and condiments I desired....well at least what I could buy from the general store.

Although our farm is a sheep property, as with many farms in Australia, it also abounded with wild kangaroo, boar and rabbit....though never came across a bush turkey!

Being an inquisitive foodie eating game is heaven and I used dad's rule as a license to experiment, exploring a new cuisine or flavour combination to create something new with our bounty.

Dad relished my inventions and though his culinary skills were not as varied mine, he loved trying new things....he'd often joke that anything I created would be leaps above his curried kangaroo stew or goulash

But it wasn’t always me hogging the kitchen....Dad would also don the apron, and on those hot December evenings it would often involve him cooking up a storm on the open woodfired brick barbecue he'd built.

Barbecued rabbit was a traditional staple for Dad.  I'd watch him cook it on a wire rack over slow burning logs, regularly turning it to keep the moisture evenly within the meat or sometimes throwing a little of his beer on it or placing some of the local grasses into the fire give it a herbaceous note.

I miss Dad’s fired delights......I haven’t had barbecued rabbit for a while.....it’s been 10 years and 10 days since I said my eternal goodbye. So this little recipe is a tribute to our tradition of ‘living off the land’ in December.....and my ever continual desire to create something new. 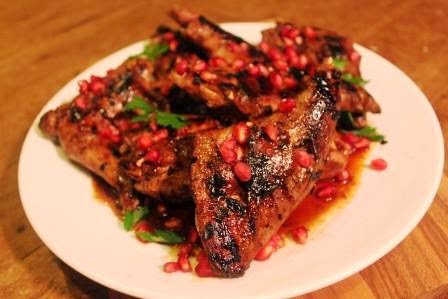 For more non-traditional festive recipes from the #letslunch blogger crew click on the links below. I'll continue to update them as they come in.

I've only had really traditional rabbit preparations (you know, at the sort of restaurant where they call it "lapin" and not rabbit), but I'm intrigued by the pomegranate idea. Sounds good!

This looks amazing, and is a beautiful sentiment to your dad. I haven't ever cooked rabbit and am almost tempted with this post. We have evil bush turkeys lurking around our holiday house near Sydney - I would be more than happy to send you one. Merry Christmas xx

What an amazing recipe and story about your family. Thanks for sharing both. Happy Holidays and as always, fun doing Let's Lunch with you and the rest!

What a lovely story and tribute to your dad. Love the living off the land!