Christmas came early for me and my family this year as my little sister, Mrs T, is about to have a baby.

So yesterday we gathered together to share the Christmas spirit and we each brought something to laden the table. The boys were in charge of drinks, Mrs T offered to make her sticky ginger glazed ham, Ms L a caramelised onion tart and salads and I was in charge of dessert.

Normally at this time in Australia its gloriously hot and sunny however this year we've been treated with rain and cool weather....which is perfect for an indulgence of Christmas pudding.

So with a little inspiration from my friend Michelle Southan's recipe in this month's Woolworth's Australian Good Taste I set out to make pudding.

For my little version I twisted the recipe by using raisins, dates, prunes and currants, a good slosh of Frangelico and a little dash of Kahlua and added a little Christmas spice. I also soaked the fruit the longer than Michelle's as I like to really infuse the flavours however if you haven't got time it will still taste delicious even if you just soak it for a few hours.

What resulted was a divine little dome of pudding with a rich buttery texture, sweet slightly nutty flavour and the warming spices of cinnamon, allspice and nutmeg giving me another dessert success. Everyone loved them ....so much so that I didn't even get time to take a proper picture as everyone had started to devour them already!

May you all have a delicious Christmas and a 'bubbly' New Year! 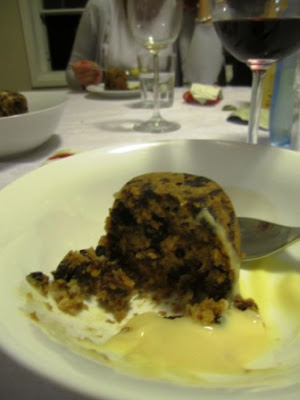